It is known that sport, especially swimming, has a positive effect on physical health. In recent years, studies have found that swimming on a regular basis also benefits our mental health. Reason enough to take a closer look at this topic. 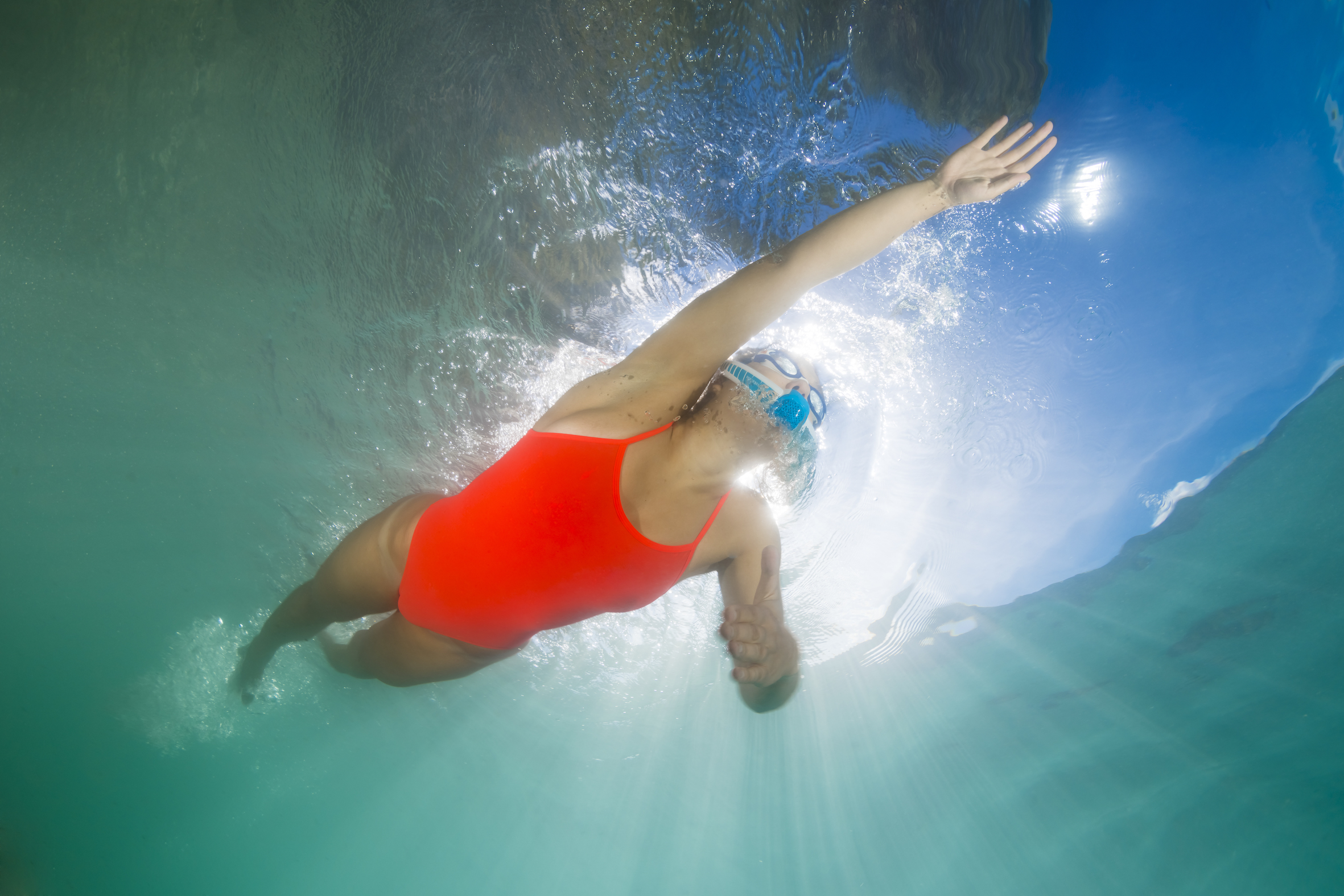 Swimming is an effective remedy against stress

It must first be said that stress is not essentially a bad thing.

A normal level of stress helps us to be motivated and to perform at a high level. This positive stress is called “eustress” and we are probably all familiar with it – typical examples include a successfully completed exam or a finished project at work. After the task is completed, feelings of happiness arise which continue to have an effect for quite some time.

It becomes critical if we do not take a break – then the eustress lasts too long and becomes so-called “distress”. In this case, the happiness hormones, also called endorphins, are outnumbered and can no longer compete with stress hormones such as cortisol and adrenaline. This can have physical and psychological consequences such as stomach aches, sleep disorders, headaches or concentration problems.

Scientific studies show that people who exercise in the water at least three times a week are less susceptible to stress and depression. It is especially beneficial for those who have a stressful job or everyday life.

Admittedly, after a hard day’s work, it does seem more tempting to end the day on the couch at home instead of going to the gym or pool but in the long run, we are not doing our body any favour this way. In any case, it’s worthwhile to overcome this temptation and get some exercise. A study conducted by sports scientists at the University of Basel has shown that sport is particularly important in times of increased stress and should not be neglected.

Although our body is initially also stressed by sport, physical exertion is followed by a relaxation phase, which has a calming and stress-reducing effect on our psyche, as mood-lifting messengers are released.

A further positive effect is that we are distracted by physical exertion during sports, thus clearing our mind and preparing our spirit for new challenges. This effect is particularly noticeable when swimming because you are largely cut off from the outside world in the water and perceive outside sounds less.

Swimming is even described by some as a kind of movement meditation in which you can concentrate fully on your swimming technique, the movement of your body and your own breathing.

If you have not been actively swimming before, but are now motivated to start, we advise you to take it slowly at the beginning and to increase your performance steadily – even 30 minutes in the water should have noticeable results, especially for the psyche. Many experts recommend interval training for beginners, e.g. to swim 50 meters at a low pace, take a short break and then continue swimming.

What might be interesting for experienced swimmers: for performance-oriented sports swimming, cooler water temperatures are more suitable, since the body heat produced during physical exertion can be released more quickly into the environment this way – 23 degrees are ideal here, and about 26 degrees are recommended at normal swimming speed.

Recent studies show that endurance sports or regular exercise increases the number of brain cells and promotes the formation of new neural connections – in simple terms: sport makes you smart! One of the reasons for this is the above-mentioned reduction in stress that goes hand in hand with sports: when we suffer from mental stress, our thinking and cognitive abilities are reduced because our body is in crisis mode and focuses primarily on essential functions. This means the more balanced and relaxed we are, the better our mind can perform, which for example also enables us to be more creative.

Another reason for the intelligence-enhancing effect of swimming is that it increases blood circulation in the head – this was found out by Australian linguists from the University of Western Australia in a study published in the American Journal of Physiology.

For this study Howard Carter, the leader of the study, had nine young men climb into an empty pool which was then filled with water and emptied again. He found out that the blood flow in the test persons’ brains was significantly higher when they were standing in the water up to their chests – at this time the blood supply of the mid cerebral artery was increased by 14 per cent, in the posterior cerebral artery by 9 per cent. Both arteries are among the main vessels of the brain, which are responsible for supplying it with oxygen, glucose and other nutrients. When the water was drained from the pool again, the measured effects could no longer be proven.

The results of this study are a further indication that in certain areas water sports are superior to other sports on land.

Self-confidence also plays a major role in our psychological well-being. A study performed by the Australian University of Griffith recently found that young swimmers are on average more self-confident than their peers who do not practice water sports. Although the reasons for this have not yet been conclusively clarified, it is suspected that this is due to the fact that water is an inherently unknown medium for humans. If we regularly move in it, we leave our comfort zone or expand it, which in turn has a positive effect on our self-confidence.

Swimming promotes the development of children

Scientists from the Australian Griffith Institute for Educational Research have studied 7000 children in America and Australia aged up to five years over a period of three years. They discovered that children who learned to swim at a very early age developed significantly better and faster than their peers who had not yet learned to swim.

Amongst others this is shown by the fact that milestones in child development were reached earlier, for example, being able to cut paper with scissors, drawing lines and shapes, as well as narrating and speaking. The socio-economic background of the test group played no role in the results.

People have always been looking for a fountain of youth that keeps them from growing old – to find it, in most cases we don’t have to search long, the nearest swimming pool can already serve this purpose if we use it regularly. This is proven by a study of the University of Indiana, which found out that people who swim regularly are biologically on average 20 years younger than people of the same age who don’t practice swimming. Researchers suggest that this is due to the many health benefits of swimming: healthy blood pressure, low cholesterol, strengthening of the heart and central nervous system as well as enhancement of our cognitive abilities.

Tips for the perfect swimming experience

To make your visit to the swimming pool, the lake or the sea as pleasant as possible, we have four tips for you:

Eat a small meal before swimming

About 2 hours before you go into the water, you should eat a small meal that contains a lot of carbohydrates – pasta, potatoes or bread are good examples. This will ensure that you will have sufficient nutrients during exercise and that your blood circulation does not cause you any problems. But be careful: a full stomach draws blood from your body, which can have a negative effect on your performance.

Water pressure ensures that your kidneys are stimulated and thus exude more water. Although you don’t notice it in the water, you sweat due to the movement in the water and also lose fluid this way. That’s why you should replenish your water reserves sufficiently after a training session – preferably with mineral water or fruit juice mixed with mineral water at room temperature.

Take a shower after swimming

This tip is especially important for swimming pools: since the water is usually chlorinated and chlorine can damage your skin, you should definitely take a shower as soon as possible after your visit to the pool. PH-neutral products should be used for body cleansing and it is recommended that you put moisturising lotion on your skin afterwards.

You won’t regret it: the breathing technique is just as important when swimming as the swimming technique – whether in the hobby or professional sector. The Powerbreather was developed by swimmers for swimmers to facilitate and perfect their breathing during sports and to maximize the training effect.

This specially developed swimming snorkel separates inhalation and exhalation – you inhale through two air tubes, which run to the left and right of the mouthpiece and contain special valves and exhale into the water through the mouthpiece. With the Powerbreather you don’t have to turn your head to breathe, so you can fully concentrate on your technique. This makes it easy to improve your freestyle swimming technique. Due to this new technology, it is almost impossible for water to enter your mouth through the snorkel.

No matter how old you are, whether you are just starting to swim or have been doing this sport for a long time – we are one hundred per cent convinced by the benefits of the Powerbreather! Since we are sure you will also be thrilled, you can test the Powerbreather for 90 days – if you are not satisfied with its performance during this period, you will get your money back immediately. Just have a look at our shop and find the right model for yourself.

Have fun in the water – if you have any further questions about swimming or snorkeling we are looking forward to hearing from you! 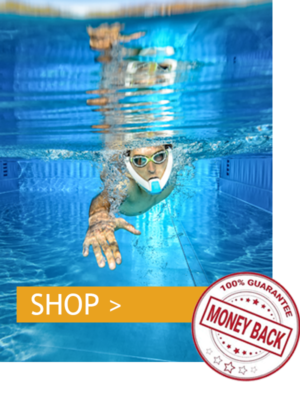