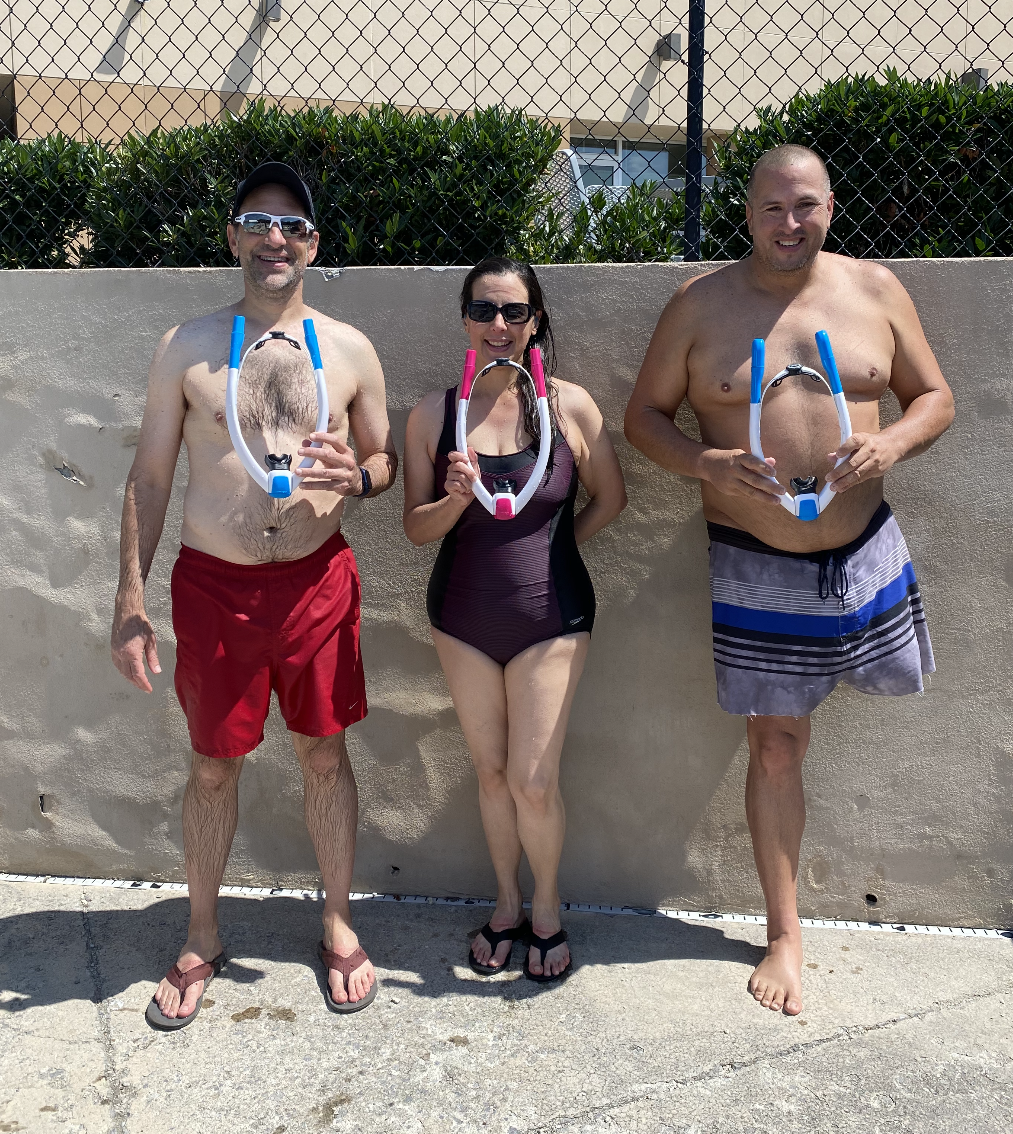 With prosthetic leg to long-distance swimmer

Dean, 52, of Maryville, Tennessee, lost his left leg as a teenager. Now, thanks to the Powerbreather, he is able to swim and control his weight again.
For years, Dean had been searching for the right fitness program to enable him to exercise regularly again despite his limitations due to the prosthetic leg - thanks to a combination of the so-called "dog paddle" swimming style and the Powerbreather this is now possible...

A transfemoral amputee, Dean uses this "dog paddle" swimming technique to swim more than 32 km per week. "I don't swim up and down the lanes like Michael Phelps," says the insurance agent from Maryville, Tennessee. "But it's a great way for me to lose weight and improve my overall fitness."

It wasn't always that way; Dean developed bone cancer as a teenager and eventually lost his left leg below the knee to the disease at age 19. Today, the former high school athlete is cancer-free. However, his handicap continued to be a major burden for him for a long time after the amputation, as it initially seemed impossible for him to find a suitable sport to stay fit and lose weight at the same time.

In his late 40s, he began participating in ParaLong Drive competitions, which involve hitting a golf ball as far as possible. However, Dean quickly realized that he would not reach his goal even with this sport, as it is not endurance training. In addition, the pressure his prosthesis put on the upper part of his left leg became so uncomfortable over time during the long competitions that he had to stop competing in golf.

Giving up has never been an option for Dean, however, and his search for the right sport continued. After doing extensive research, he decided to give long-distance swimming a try. "I never thought I would become a swimmer," he says. "My prosthesis is computer-chipped, which is why I wasn't even allowed near water in the past."
With the dog paddle swimming technique, however, Dean is able to navigate the water without a prosthetic. However, there is one prerequisite: the powerbreather.

With the dog paddle swim style, you move much slower than with other swimming techniques, so you are lower in the water and push against the water as you paddle forward. At the same time, the technique requires at least two to three times as much energy expenditure.

Even with two healthy legs, it is more difficult to catch your breath in this style of swimming than in breaststroke or crawl, for example. With only one leg, it is almost impossible. With the help of the Powerbreather, however, this is no problem at all, even for physically limited people like Dean Jarvis. Thanks to the sophisticated technology of its two air tubes, the Powerbreather makes it possible to remain constantly with the face underwater during swimming training and still be supplied with 100 percent fresh air the entire time. At the same time, no water penetrates through the intelligent valve system. This distinguishes the professional swimming snorkel from conventional models with only one air tube. With the Powerbreather, one can fully concentrate on one's body and swimming technique.

After Dean got used to being in the water without a prosthesis but with a Powerbreather, he started training regularly. After years of wanting to exercise but not being able to, he is finally able to get back into physical shape and significantly improve his quality of life.

Within six months, Dean was able to lose 15 pounds (about 7 kilograms). For this year, Dean set a goal of paddling 25 miles (about 40 kilometers) in 30 hours, and with the reopening of the swimming pools, he has continued his training with the Powerbreather adamantly. He has since lost a total of 20 pounds (about 9 kilograms) and feels more athletic than ever.

"For the first time since I started wearing a prosthesis, I had to have it adjusted because I lost so much weight," the 52-year-old says today. "I never thought I would feel fitter than I did when I was in high school."

How I got my breathing problems under control

Last year we conducted an interview with André who suffers from breathing problems caused by years of cigarette consumption.

André has been swimming since childhood and has participated in various championships. Today, he still swims in open water every day irrespective of the time of year or how cold the water is.

He learned about the Powerbreather through the recommendation of a friend who knew he had always been a passionate swimmer.

Since André’s doctor advised him to exercise his lungs and his friend was so enthusiastic about the Powerbreather, André decided to get one for himself. His goal was to help his lungs recover while improving his swimming technique.

With a respiratory condition, it is especially important to practice conscious and deep breathing in and out, which is why André had been doing breathing exercises for some time.

When he first tested the Powerbreather in the water, André was initially a little irritated, as breathing in and out seemed quite difficult to him at first. However, he became accustomed to the device after just a few minutes and was able to swim without any problems. During the swim, he was able to train his lungs by breathing in and out very long and deeply, while at the same time concentrating on his technique, which he continued to improve each time.

The training showed clear results after a short time. Even out of the water, André felt almost no breathing difficulties anymore. This finding was also confirmed by his attending physician, as regular check-ups revealed that André’s breathing capacity had increased significantly.

“I never expected that training with the Powerbreather would be such an enormous help in getting my breathing problems under control,” André tells us in the interview.

Not only has his health situation improved as a result of training with the Powerbreather, it has also been possible for André to raise his swimming technique to a whole new level. Since he usually swims in the ocean, he often had trouble with water entering his ears when turning his head to inhale – a problem that has become a thing of the past since using the Powerbreather, because the twisting motion in the cervical spine is eliminated when swimming with the Powerbreather. This also resulted in less strain on the spine and more fluid movements when swimming.

Swimming without the Powerbreather is no longer an option for André today!

Emely has loved swimming since childhood, even though she suffers from severe asthma. She is on the competitive swim team in college.
In 2017 and 2018, her condition had worsened significantly. Due to the massive difficulties that she experienced during her swim training, she had to stop training sessions more and more often. One can imagine that this is a very stressful and frustrating situation for a young person, especially when swimming competitively.

With her mother’s help she searched the Internet for aids for asthmatic swimmers, but initially without success. One day she read a comment in a chat and came across the term “Powerbreather”.

She did some research and since she had already tried everything else, the Powerbreather seemed to be Emely’s last hope. Her mother ordered it the same day.

The results exceeded her wildest expectations. During the very first training session with the Powerbreather, Emely made it through her warm-up workout without a break for the first time in months. Since that day, she has continued to improve her fitness and lung capacity while swimming. Not only that, but the now 17-year-old recently took 1st place (among other victories) in freestyle in her high school’s championships. As her swimming performance increased, her asthma has improved significantly. The Powerbreather has become a constant companion in Emely’s life.

Brandon has suffered from asthma since he was a teenager, when he was a member of the local country club’s swim team, and even then he noticed that sports helped alleviate the symptoms of his condition.

As Brandon got older, he was like many others: he did fewer sports over time and gained weight. This eventually led to a dramatic deterioration of his asthma and the need to take various medications daily.

This condition was not something Brandon wanted to accept, and he began trying different sports, including tennis, CrossFit and various martial arts.

Even though the exercise was good for his lungs, the opposite was true for his knees and back, which began to hurt more and more.

When a back injury came on top, sports were out of the question at first. Brandon’s wife then suggested that he should take up swimming again. It was worth a try. There were few other alternatives, and since Brandon had access to the local university’s swimming pool, he gave it a try.

Even though he immediately enjoyed swimming again, he had some difficulties because he could not turn his neck as well as he used to. This forced him to take several breaks during practice.

Once back home, Brandon set out to search the internet for a snorkel that would help him avoid the painful rotation of his neck while swimming. In the process, he quickly came across the Powerbreather. After reading many positive testimonials on the Internet, he ordered one.

The first swim workout with the Powerbreather changed everything for Brandon. He didn’t have to turn his head to breathe or stop during the workout. Today, he swims between 1,000 and 2,000 meters a day. Not only that, Brandon’s asthma has completely disappeared, he’s lost 10 pounds, no longer needs any medication and feels physically and mentally fitter than he has in a long time.

I have been always passionate about swimming. I learned it as a toddler and have been enjoying it ever since. During my college years, I became a swimming instructor.

In 1997, a truck hit me from behind while I was waiting at the traffic lights. My lumbar vertebra suffered a fracture, but I did not know, I sustained other injuries drawing attention, including my cervical spine and eyes.

I recovered and thought everything was fine. I was working hard re-building a house with my husband, carried heavy things, spent long hours driving. Some 17 years later, my lumbar spine started collapsing. I underwent the first surgery in 2014. The second one came two years later. The doctors recommended swimming, specifically free-style, as the best rehabilitation. I was glad hearing that. However, I found it pretty challenging. Any rotation in my cervical and lumbar spine caused more problems than good. I tried numerous snorkels but was not happy with any of them. I was getting frustrated – I live in a perfect climate and can swim outdoors all year round, I should swim, but I cannot swim due to the all-limiting pain.

In 2017, I travelled to attend a conference and, bored, was going through the airline magazines. And there I saw it! It was a snorkel, but it was not a snorkel. In was the Powerbreather. It seemed rather expensive, however, intrigued by description of the technology, I decided to give it a chance. I could not wait to try.

Finally, my new Powerbreather was in my hands. To learn the breathing technique took no time. This was what I have been waiting for! No water going inside, no twisting or rotation moves. I enjoyed swimming again feeling free like a fish.